Let’s go down the steps to the water. 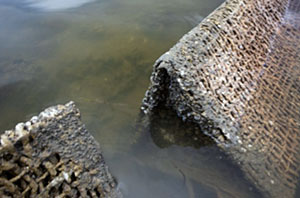 At the bottom of the stairs you will see some triangular structures called reef prisms. This is a test site for these structures. 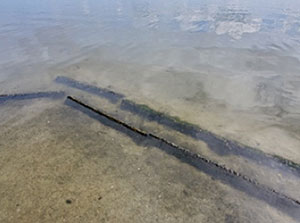 Reef prisms are a new material developed by Dr. Mark Clark of the University of Florida/IFAS Soil and Water Sciences Department. They are made of jute fiber erosion control mats and Cement-All rapid-setting concrete. The jute mat is soaked in the concrete mixture and draped around a form. Once dry, the forms are removed and the prism is filled with shell and capped off. 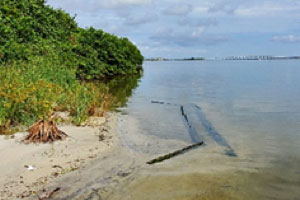 They act as a substrate for oysters to grow on, which is their main goal, but they also help to build up the beach depth and they contain no plastic that may break down and enter the lagoon. 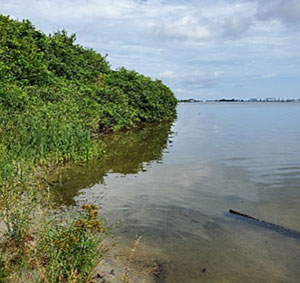 Looking up the shoreline to your left (north), you will notice our living shoreline that protects the Lagoon House and the bluff it is sitting on. If you walk up that way you can observe the “walking trees” (red mangroves) doing their job. Red mangroves are called “walking trees” because of the way their prop roots “walk” out into the water and spread. This living shoreline was installed after the destructive hurricanes of 2004 and it has been doing its job ever since. 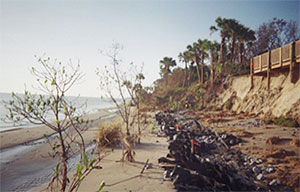 The shoreline after the hurricanes of 2004, before the natural shoreline was installed. 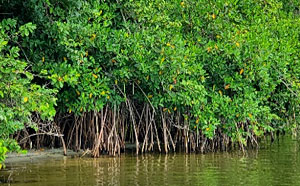 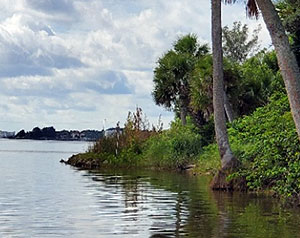 If you look down the shoreline to the right (south), you will notice some coquina breakwaters. We have installed four and have permits for twelve more but lack the funding to finish the installation.

These breakwaters have helped stabilize and increase the shoreline and they provide a protected place for mangroves to get started as well as spartina grass and other plants. 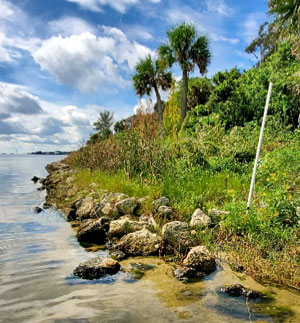 Close up of coquina with plants. 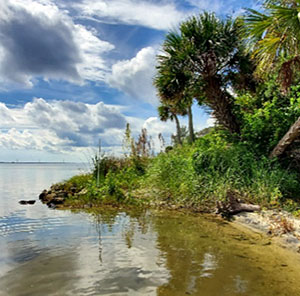 Notice how far out the beach is in this area now. 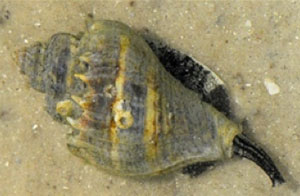 If you look in the water close to shore you will undoubtedly see some crown conchs (Melongena corona).

These guys are snail predators — seeking prey slow enough for them to catch. They usually target bivalves such as oysters and clams, but they are known to seek out other snails — like whelks.

Crown conchs are known to feed on dead organisms they encounter and may be cannibalistic. They tend to stay near shallow water due the large number of predators at greater depths. They are common in seagrass meadows and salt marshes and — if in high numbers with few competitors — have been considered an indicator of poor water quality. 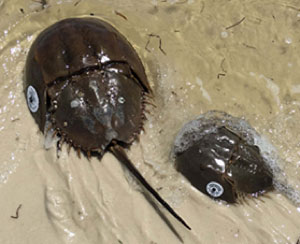 These “living fossils” have been around for more than 300 million years, making them older than even dinosaurs. They look like prehistoric crabs, but are actually more closely related to scorpions and spiders.

The horseshoe crab’s tail, called the telson, looks intimidating, but it is not dangerous, poisonous, or used to sting. Horseshoe crabs use the telson to flip themselves over if they happen to be pushed onto their backs. If you find one stuck upside down, help it back over, but don’t pull on its tail. 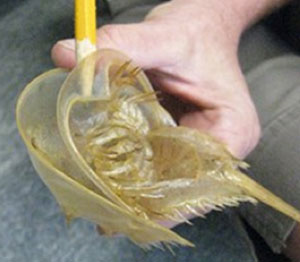 Crab eggs, which are laid in spring and summer, are a food source for numerous birds, reptiles, and fish, so not many hatch. If they do get to hatch, the larval horseshoe crab looks like the adult with no tail.

The crabs can live for more than twenty years and will molt sixteen to seventeen times. You may find some of the molts washed up on shore.

Adult horseshoes serve as prey for sea turtles, alligators, horse conchs, and sharks. You can see that they are very important to the ecosystem. 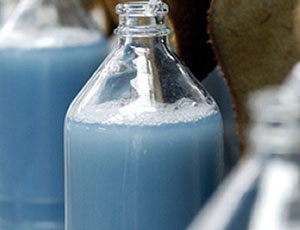 Horseshoe crabs are also very special because their unique, copper-based blue blood contains a substance (LAL) which clots in the presence of certain groups of bacteria. These bacteria are difficult to detect by other means.

The FDA requires the use of LAL to test all injectable and intravenous drugs produced in the U.S. One liter of this blood sells for $15,000.

The good news is that some of a horseshoe crab’s blood can be removed without killing the animal. And even better news, a synthetic form of LAL is in the works which should help protect the crab, since it was added to the vulnerable species list in 2016.

See a fin in the water? Is it a shark or an Atlantic Bottlenose dolphin?

Notice in the image that a shark fin has a straight trailing edge while a dolphin fin is curved.

The Indian River Lagoon is one of the most important bull shark nurseries along the U.S. Atlantic Coast. 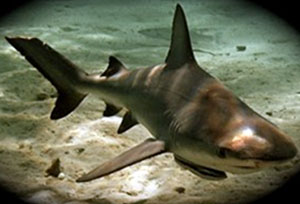 In the spring, female bull sharks enter the Lagoon through inlets and have between 1–13 pups. The female then leaves, but the pups remain in the Lagoon until they are just over six feet in length. Bull sharks are tolerant of both salt and fresh water and are known to go far up into rivers that enter estuaries. 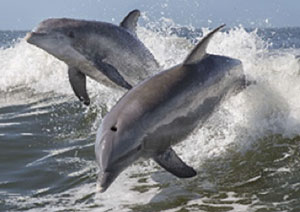 The Lagoon is also the permanent home to more than one thousand dolphins. So the state of the Lagoon is very important for their survival.

They tend to have a ”fission-fusion” social association in the Indian River Lagoon, meaning they come together for a bit and then split up and the groups change. 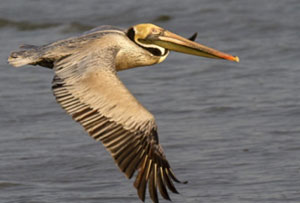 You might look up and see one — or many! — of these birds flying overhead or fishing. 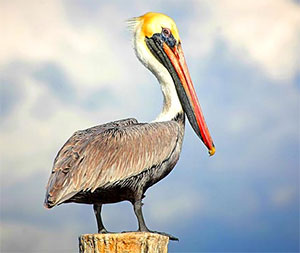 The brown pelican’s body is of course brown, but the head coloration is somewhat variable — often including red, yellow, orange, or white.

In Florida, pelicans nest mostly in mangroves. Another good reason to plant them. 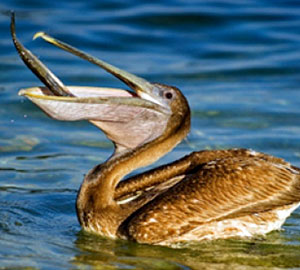 The brown pelican feeds mainly on fish, but occasionally eats amphibians, crustaceans, and the eggs and nestlings of birds.

Unlike other pelican species who work in flocks to corral their prey, brown pelicans dive headfirst into the water from heights as great as fifty feet to scoop up fish near the surface.

Once they capture the fish, they tip their head upward or to the side to drain the water from their bill pouch.

Though it looks as if the pelican submerges itself in the water during the dive, they usually remain on or near the surface of the water.

Thank you for taking the time to explore the grounds of the Lagoon House. Join us in our mission to restore and protect the Indian River Lagoon by becoming a member of MRC.