You are here:Home » Tour » Stop #1: Welcome to the Ted Moorhead Lagoon House! 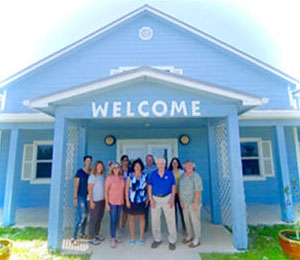 This building is the culmination of a collaborative effort by multiple agencies that started more than 20 years ago under the leadership of Marine Resources Council’s Founding Executive Director Diane Barile and the vision of Ted Moorhead (in the center of the picture above), an MRC Board member.

In 1998, US1 was being expanded to six lanes and a retention pond was planned for here at Ais Lookout Point Park. Ted Moorhead saw this as an opportunity and believed that this site would be an ideal location for an environmental learning center. Dave White, a Palm Bay Grant writer, suggested that the National Scenic Byway program could potentially be a source of funding. 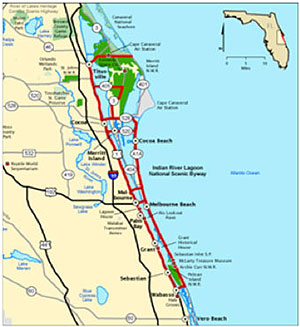 The Lagoon House serves as the home base of MRC, whose mission is to improve water quality and to protect and restore the fish and wildlife resources of the Indian River Lagoon, coastal waters, inshore reefs, and the watershed by advocating and using sound science, education, and the involvement of the public at large. You can become a member of MRC and join us in our mission. Go to our website to learn more.

Now go north to the end of the patio to Stop #2: Our Mangrove Nursery.